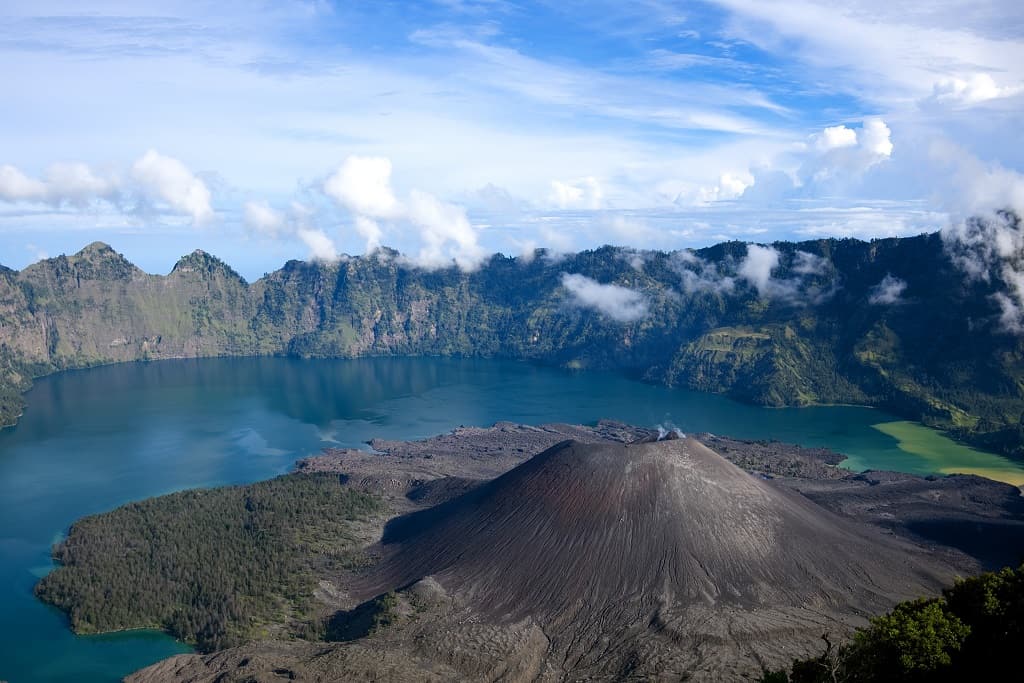 I have been lucky enough to visit Indonesia a lot over the past five years and I still don’t feel like I’ve scratched the surface of this beautiful and varied nation.

Each time I come back, it feels as if there are more incredible places to see than the last time I came.

To call it a country seems almost absurd – made up of 17,508 islands and stretching across three time zones, it is more like a continent than a single country… and yet a lot of people only make it to Bali?

Where to go in Indonesia Outside of Bali

From lush rainforests to surf strewn beaches, kalaedoscopic corals, colourful temples and misty mountains, Indonesia has everything a visitor could want.

Aside from the scenery, Indonesian people are amongst the friendliest I’ve ever met, and I’m sure that I’ll be returning to this beautiful land for many years to come.

These are just a few of my recommendations for places to see when visiting Indonesia, outside of Bali.

Arriving at sunrise is undoubtedly the most magical time to experience this ancient monument. Climbing the stone steps in the pitch black early hours, following only torch light, you wait in darkness until light begins to appear in the sky. As the sky gradually infuses itself with a navy blue, you begin to see the sillouettes of the 72 stone stupas dotted around the main temple platform.

There is a pre-dawn silence as a magical mist hangs above the jungle carpet beyond the temple walls. As birds begin to chirp, and the sky turns from a deep blue to musky shades of purple, the outline of a volcano appears on the horizon.

Despite the early wake up time and being surrounded by many other tourists, I stood in a trance for several hours, as each few minutes of the sunrise took on a new and more enchanting appeal.

Top tip: DEFINITELY GO FOR SUNRISE! Although it is more expensive than other times of day- it is 100% worth it, and hands down the best sunrise I’ve ever experienced.

Banyuwangi quickly became one of my favourite places I’ve visited in all of Indonesia. It’s relatively untravelled yet it’s hard to see why. After all, it’s only a 20 minute boat ride away from Bali and boasts some of the most jaw-dropping natural scenery in all of Indonesia.

Perhaps most famously, Banyuwangi is home to the stunning volcano of Kawah Ijen. You can make the hike up to the top and be rewarded with the natural phenomenon of the blue fire as well as an incredible sunrise from the peak.

Besides that though, the area also has multiple areas of natural beauty such as Baluran National Park with the little-known Bama Beach, Tabuhan Island and Pulau Merah – which had one of the most beautiful sunsets I’ve ever seen!

Clear warm waters with some of the most diverse marine life in the world. Untouched beaches.

During my brief 3 night stay in Raja Ampat, West Papau I had to pinch myself several times as a precautionary reality check.

And the jewel in the crown – Raja Ampat the turquoise encrusted archipelago of islands.

If paradise had a name, West Papau would have a good shot at the title. To the far west of Indonesia, bordering Papau New Guinea, these two tropical peninsualas are a province of Indonesia not often visited by tourists.

It’s not difficult to see why – a flight from the capital city of Jakarta took 5 hours in itself, add to that two further boat journeys and you finally arrive at your postcard destination.

You can’t throw a stone without hitting an ancient temple and they don’t come much bigger than Prambanan temple, the largest Hindu temple site in Indonesia.

From the ancient to the traditional, a walk around Yogya will bring you to the colourful houses of Kampung Cali Code – a riverside settlement painted in bright colours (and a perfect photo opportunity)

Top tip: If you fancy a taste of opulence then pay a visit to the Phoenix Hotel, a heritage hotel set in a colonial building dating back to 1918 – you can have tea and cake in the regal reception rooms!

Surfers – you’ve found your home! Lombok is the more chilled out brother of Bali, where the waves roll in as you sit under a palm tree sipping a mojito.

With long rugged beaches and the mighty Mount Rinjani (the active volcano) at its centre, Lombok is a place of wild beauty.

As a more laid back version of Bali, it is easy to get around the island by moped stopping to admire the views with a coconut in hand when you feel tired.

Top tip: If you get bored of surf beaches and volcano (who are you?!) you can get a short boat ride to the Gili islands – a backpackers paradise island where giant sea turtles float lazily in the water, and sun seekers sip on their cocktails as the sun goes down and fire poi artists hit the beach for their nightly performance.

This was one of the most beautiful climbs I’ve ever been on. Imagine being above the clouds and everywhere you look there’s an incredible panorama – that’s Mount Rinjani.

Be warned though, making it to the summit is no easy feat and shouldn’t be underestimated – the first day of climbing is easy enough but the final ascent can be very challenging.

We opted for the 3 day 2 night package, which included a hike around the crater itself and gave us some of the most spectacular views.

The final night was spent camping on the other side of Rinjani, looking out to Bali with a front-row seat to one of my favourite ever sunsets.

This has to be some of the most untouched and incredible scenery in all of Indonesia.

If you’re looking to get away from the tourist trap and head to somewhere a bit more off the beaten track in Indonesia, then Flores is a more adventurous option.

A lush green island to the west of Bali and Lombok, there is natural beauty around every corner. With a laidback island vibe, you will hear the sounds of reggae as you pass through the windy roads of hillside villages.

By far one of the most impressive sites of natural beauty, is the Kelimutu Crater lake –a volcano with three crater lakes each a more vibrant shade of blue. You can drive around the island by hiring a driver, or your own car or moped (if you’re brave).

On the west side of the island is the gateway to the Komodo National park – the town of Labuan Bajo – and some of the best diving spots in the world. Mantarays, sharks, and turtles can be spotted in world class dive spots in this marine park.

Definitely some of the best diving I’ve ever done, although not for the faint hearted due to the strong current in some of the dive spots.

Top tip: Experience land, sea and dragons all at once by booking a two night boat trip from Labuan Bajo back to Lombok or the Gilis. The one I booked took me to the famous pink beach, several snorkel spots, twilight bat watching and to see the famous Komodo dragons up close. Be sure to check the weather before though – the sea can get pretty choppy at certain times of year!

This is one of the only places in the world where you can see Orangutans in the wild. Not only that, but you also get so close to them that you can practically touch them (although that’s definitely not allowed or reccommeded, you will most likely lose an arm).

You can get to the sleepy riverside village of Bukit Lawang fairly painlessly from Medan via a 5 hour bus journey. Once you’re there, you are greeted with thick jungle and monkeys walking along the river bank – we even saw a family of Orangutans walking along the rocks from our balcony.

The main pull though is the jungle treks that every guesthouse and local company will offer. Jump on one and spend the next few days walking through the jungle surrounded by the most incredible wildlife. While it’s not guaranteed, it is very likely you’ll see wild Orangutans as this is one of the best places in the world to do so.

Another absolute gem. Lake Toba feels like a completely different country to a lot of Indonesia, with scenery that looks like it deserves in Austria or Canada. The Lake is over 100km long and was formed from the caldera f a supervolcano over 70,000 years ago.

Now, it is a stunning natural landscape that deserves to be explored on your next trip to Indonesia. It’s the sort of place where you can so happily do nothing, spending your days relaxing by the lake with a coconut in hand, sampling some of the local avocado and chappati.

However, you shouldn’t just do this because there’s so much to see!

Make sure to make the 4 hour scooter drive (or get a driver) and go to the Sipiso-Piso waterfall at the North of the Lake. It is honestly one of the most impressive waterfalls I’ve seen so far and is in fact the fourth largest in the whole of Indonesia!

For more information about Lake Toba, check out our Medan to Lake Toba guide.

Ok I know I said outside Bali, but the truth is that the North of Bali may as well be a whole other world – and practically no-one goes there!

Bali is undoubtedly the destination in Indonesia that most tourists have probably heard of.

Unfortunately, it sometimes gets a bad rap due to the brash appeal of places like Kuta and Seminyak – which are full of big hotels, bars, restaurants and shopping malls.

Travel only a couple hours or so to north – away from the hussle and bussle and you will reach a more authentic side of Bali – rainforests and rice paddy fields speckled with Hindu temples.

You can start with the hippy chic town of Ubud, is a must visit for some of the best plant-based food you’ve ever tried, but then make sure to rent a scooter or a car and venture even further North for some really untouched nature.

Top tip: If you’re confident riding a scooter, then this is the best way to get around in Bali. The roads are fairly safe and you can hire one anyway for a cheap price – plus you get to see all of that stunning countryside from the back of a bike!

Why Travel Outside of Bali?

I’ve only scratched the surface of what Indonesia has to offer!

I have no doubt I’ll keep coming back, so if you’ve got any great places you think I should know about, let me know in the comments below.

Have we missed anything? Let us know in the comments below!