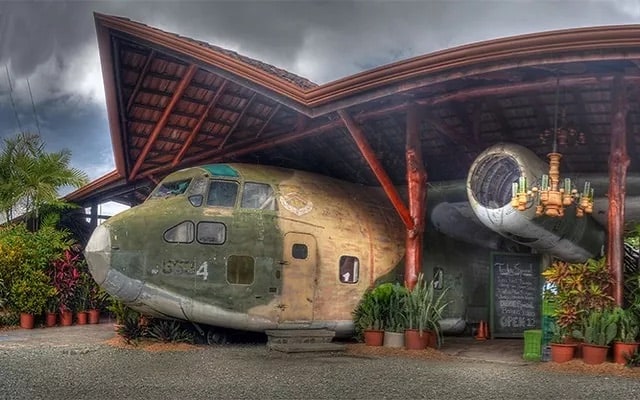 This restaurant is built around a CIA Spy Plane.

Did you know that in Costa Rica, in the area of Manuel Antonio, there’s a restaurant built around an old CIA spy plane.

The inside of the plane has been converted into a bar, complete with the original cockpit.

There’s also a great view for sunset too!

Where is the CIA Spy Plane Restaurant?

The restaurant is called El Avion and it’s located in Manuel Antonio.

The restaurant is built around a C-123 Fairchild cargo plane, converted into a pub and a two level bar.

It also has some of the best views over Manuel Antonio National Park, so try to get up there for sunset!

Why is the restaurant built around a CIA Spy Plane?

The Reagan Administration set up a bizarre network of arms sales to Iran designed to win the release of US hostages held in Lebanon and raise money to fund the Nicaraguan, counter-revolutionary guerrilla fighters, commonly referred to as the “Contras”.

By artificially inflating the prices of arms, “National Security Council” NSC official Oliver North, was able to reap profits that could be diverted to fund the counter-revolutionaries of the Cuban allied Sandinista government.

Of the $16 million raised, only $3.8 million actually funded the Contras. With the CIA’s help, they purchased several items, including two C-123 cargo planes, two C-7 planes, a Maule aircraft, spare parts, and munitions.

This particular C-123 was eventually abandoned at the International Airport in San José.

In August 2000, El Avion Restaurant purchased the abandoned Fairchild and shipped the pieces of the Iran-Contra relic to Quepos.

The fuselage was shipped via ocean ferry because it was 10 inches too wide for the antiquated Chiquita Banana railroad bridges!

This information was sourced from the El Avion history section.

You can find more country fun facts on The Life of Jord’s YouTube & TikTok accounts.