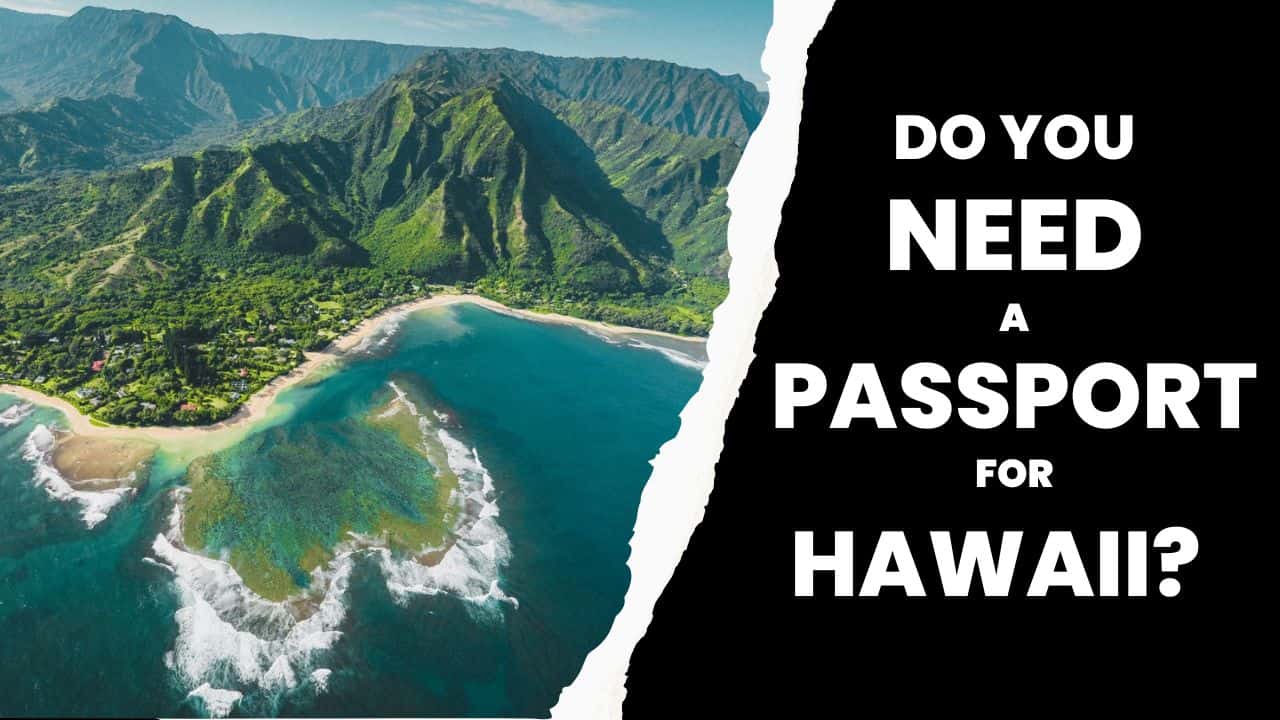 Do You Need A Passport to Go to Hawaii?

Traveling to Hawaii is a dream for so many people. The tropical climate, sandy beaches, and lush vegetation make it a truly unique destination.

But do you need a passport to fly to Hawaii?

While it may seem like a different world, Hawaii is actually part of the United States. This means that the documents you need for travel are the same as any other U.S. state.

Here’s what you need to know before you travel to the Hawaiian Islands.

Do You Need A Passport to Go to Hawaii?

The answer to this question solely depends on your citizenship.

A US citizen does not need a passport for Hawaii since Hawaii is a part of the US, and a passport is not needed to travel domestically.

Any state-issued id card or driver’s license is enough to travel to Hawaii.

So for a US citizen, flying to Hawaii without a passport is actually very easy.

If you’re international and don’t have US citizenship, the requirement are the same as if you were flying anywhere else in the US.

Travel Documents for US Citizens Flying to Hawaii

If you’re a US citizen, you can use your government-issued photo ID to fly to Hawaii.

This can be your driver’s license, passport card, or even a military ID. You can find a full list of accepted IDs on the TSA website.

*It’s important to note that, starting May 3, 2023, the TSA will require all US state driver’s licenses to be REAL ID compliant, in order to board domestic flights, including flights to Hawaii.

So if your driver’s license isn’t currently REAL ID compliant, you’ll need another form of ID for your trip.

What if I’m not a US citizen?

If you’re not a US citizen, you’ll need a valid passport and visa in order to enter the country of the United States.

Hawaii is officially a part of the United States, so the entry requirements are the same as if you were flying to the mainland.

You can find more information on the requirements for entry into the United States on the US Department of State website.

Can You Fly to Hawaii Without a Passport?

One needs to be a permanent citizen of the US with a proper state-issued id card for travelling to Hawaii without a passport.

Since the US Government considers travelling to Hawaii as domestic travel, US citizens are allowed to travel without a passport.

However, after the commencement of REAL ID in the year 2023, every traveler regardless of their citizenship needs to present REAL ID before traveling to Hawaii.

READ MORE: Where Can You Fly Without a Passport From the USA?

What Documents Do You Need for Hawaii?

Along with your passport, the most essential document required to travel to Hawaii is a valid visa for the United States.

You’ll need to follow the same immigration rules as traveling to any other mainland US destination.

These requirements are exactly the same for Hawaii, as Hawaii was declared the 50th state of the US and is a part of the US territory:

According to the general rule given by the US Department of Homeland Security (DHS), a valid identity card is needed.

Starting May 3, 2023, the TSA will also require all US state driver’s licenses to be REAL ID compliant, to board any domestic flights, including all flights to Hawaii.

Until then, your standard identity card is enough to travel to Hawaii.

Apart from this, an Agricultural Declaration form will be provided on the flight itself. This document needs to be handed over to the US Border and Customs officer at the International Arrival building.

What Documents Do You Need to Travel Between the Islands in Hawaii?

Traveling between the islands of Hawaii is considered to be domestic travel.

In the case of domestic travel within the US, the only document you will require is your valid identity card.

These rules the same as if you were traveling to any other US territories, such as Puerto Rico or the Virgin Islands.

Other travel restrictions for Hawaii

Where is Hawaii Located?

Hawaii, the 50th state in the United States, is located in the Pacific Ocean. It is made up of a chain of 135 islands, although only seven are inhabited.

Hawaii lies about 2,400 miles from the West Coast of the mainland and is located southwest of the continental United States.

Hawaii’s nearest neighbors include American Samoa and Guam to the south, and Midway Islands to the northwest.

The island chain was originally inhabited by Polynesians, before being discovered by British explorer James Cook in 1778. Hawaii became a state in 1959 and has since become a popular tourist destination known for its beautiful beaches and diverse cultures.

So while Hawaii may be far from mainland America, its stunning natural beauty and rich history make it well worth the journey.

You can see where Hawaii is on a map here:

What Are The Major Islands in Hawaii?

The major islands in Hawaii are Oahu, Maui, Kauai, Lanai, Molokai, and Kahoolawe.

Oahu is the most populous island in Hawaii and is home to the state capital of Honolulu.

Maui is known for its lush tropical scenery and popular tourist destinations such as Lahaina and Wailea.

Kauai is nicknamed “The Garden Isle” due to its lush vegetation and dramatic coastline.

Lanai is the smallest inhabited island in Hawaii and is known for its luxury resorts.

Molokai is the most rural of the major islands and is home to Kalaupapa National Historical Park, which is a former leper colony.

Kahoolawe is uninhabited and served as a bombing range for the US military during World War II.

Is Hawaii Part of the United States?

Yes, Hawaii is part of the United States. It became the 50th state in 1959 and is located in the Pacific Ocean.

Can You Travel Without a Passport to Hawaii?

If you’re a US citizen flying to Hawaii, all you need is a valid government-issued photo ID (REAL ID after May 2023).

If you’re not a US citizen, you cannot travel without a passport to Hawaii. In order to travel to Hawaii, you will need a valid passport and a US visa.

Can I Move to Hawaii From The US?

Yes, you can move to Hawaii from the US. To do so, you will need to obtain a Hawaii driver’s license and register your car in the state. You will also need to establish residency in Hawaii and meet all other eligibility requirements.

For more information on moving to Hawaii, visit the State of Hawaii website.

The best month to visit Hawaii varies depending on the island you’re visiting.

What is the Go Oahu Card?

The Go Oahu Card is a discount card that offers admission to over 30 tourist attractions on Oahu, Maui, Kauai, and Lanai. It can be purchased online or at participating outlets.

So Do You Need a Passport for Hawaii?

As you start planning your trip to Hawaii, it’s important to make sure you have all the proper travel documents in order before your departure date.

If you’re a US citizen flying within the United States, all you need is a valid government-issued photo ID.

However, if you’re not a US citizen, you’ll need a valid passport and visa in order enter the country.

For more information on travel documents and requirements, be sure to check out the TSA and Department of State websites before booking your trip.

READ MORE: Can You Fly To Mexico Without a Passport?