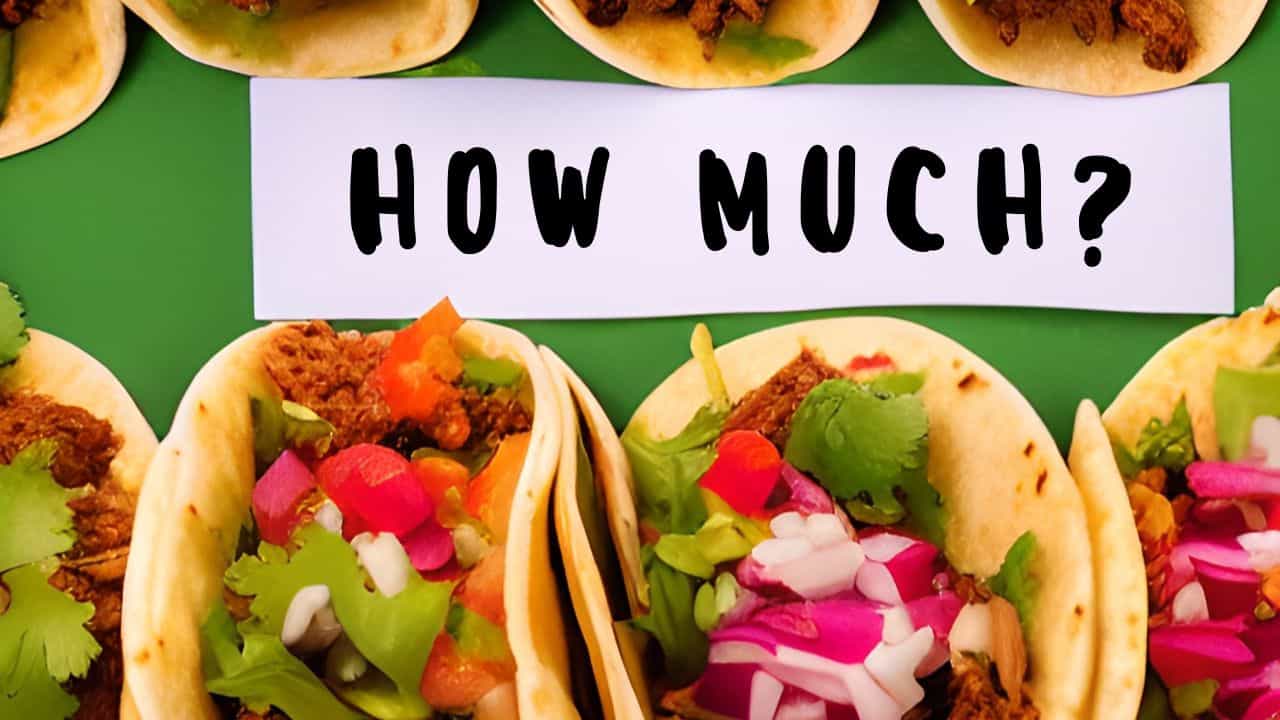 Mexican food is undeniably one of the best cuisines in the world, and what better place to try authentic tacos than in Mexico itself?

But how much do tacos cost in Mexico? That’s a question we get asked a lot!

In this blog post, we’ll break down the average cost of tacos in Mexico as well as offer some tips on how to find the best tacos while traveling through Mexico.

How Much is the Average Taco in Mexico?

However, prices will vary depending on the type of taco you order and where you order it from.

For example, street tacos are typically going to be less expensive than tacos from a sit-down restaurant.

If you’re looking for the cheapest option, we recommend ordering street tacos from one of the many taco stands that can be found throughout Mexico.

You can even find tacos for as little as $0.10 on the street stands!

Top 3 Things To Do When In Mexico

How Many Tacos Should You Order?

When it comes to tacos, there’s no such thing as too many. However, it can be overwhelming trying to figure out how many tacos to order.

A good place to start is with three tacos per person.

That way, you have room to try different options without over-ordering. Of course, if you’re still feeling hungry after three tacos, feel free to ask for more.

And don’t forget about all the delicious condiments that go along with tacos – make sure to add the extra salsa, guacamole, pickled onions, and last but not least, the famous pico de gallo.

After all, it’s better to have leftovers than not enough tacos!

What Are The Best Type of Tacos in Mexico?

When it comes to tacos, Mexico obviously knows how to do them right.

In fact, tacos are more than just a dish here – they represent a whole way of eating.

From tacos de canasta (basket tacos) offered at cheap prices to tacos made with more expensive ingredients like taco árabe or arrachera, there is something for everyone’s taste and budget.

And with so many different types of tacos available – tripa, al pastor, barbacoa, carnitas – the possibilities are endless.

Next time you’re in Mexico, be sure to sample some of the authentic Mexican tacos and experience this beloved aspect of Mexico’s cuisine for yourself.

How Much Are Tacos in Cancun?

Tacos in Cancun can cost between 20-30 Mexican Pesos, which is $1-$1.50 USD, which is much higher than other parts of Mexico.

While this may seem like a lot for one taco, remember that wages are generally higher in Cancun than they are in other parts of Mexico.

There will also be a big price difference between Cancun Town and the Hotel Zone. For example, you will be able to find street tacos in Cancun Town for as little as 10 pesos.

While the prices may be higher than average in Cancun, they’re still relatively affordable if you’re on vacation.

How Much is a Typical Meal in Mexican Pesos?

Of course, this will depend on the type of meal you order and where you order it from.

A simple plate of street food like tacos or quesadillas will be on the lower end of this price range, while a more upscale meal from a restaurant will be on the higher end.

Keep in mind that meals are typically cheaper during lunch than they are at dinner.

Is Food Expensive in Mexico?

Overall, food in Mexico is relatively inexpensive when compared to other countries around the world.

For example, a meal that might cost $25 USD in the United States would only cost around $5 USD in Mexico.

That being said, there are definitely some expensive restaurants in major cities like Mexico City, Cancun and especially Tulum.

So, if you’re on a budget, we recommend sticking to street food like tacos and casual eateries to save money.

So How Much Are Tacos in Mexico?

If you’re planning a trip to Mexico, trying some authentic tacos should be high on your list of things to eat!

The good news is that tacos are relatively inexpensive, with most costing between $0.50 – $1 USD.

While street tacos are typically the cheapest option, don’t forget to try some of the delicious sit-down restaurants as well!

No matter what your budget is, there’s no doubt that you’ll be able to find plenty of great options for satisfying your taco cravings while traveling through Mexico.