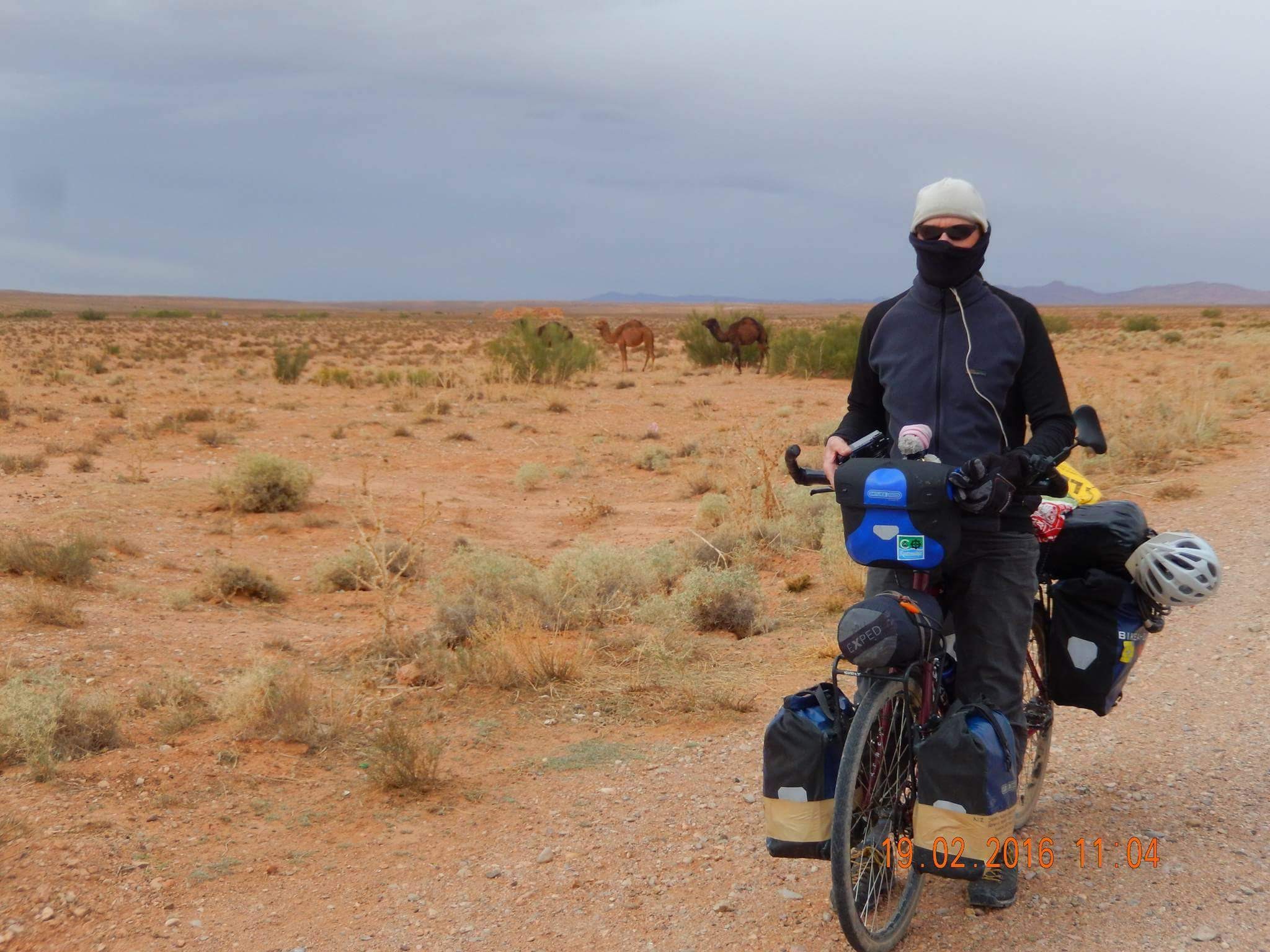 Paul Franklin has struggled through life with spinal problems ever since he was young and recently he endured extensive spinal surgery. But none of this has stopped him from doing what he loves, from cycling the world. This is Paul’s story.

My name is Paul Franklin, and forty six years ago I fractured my neck at the C3 vertebrae. It was November 30th 1971.

I was still just a teenager with so much ahead of me.

I endured close to two years of wearing a collar, and physiotherapy throughout my school years.

Little did I know there was so much more to come. 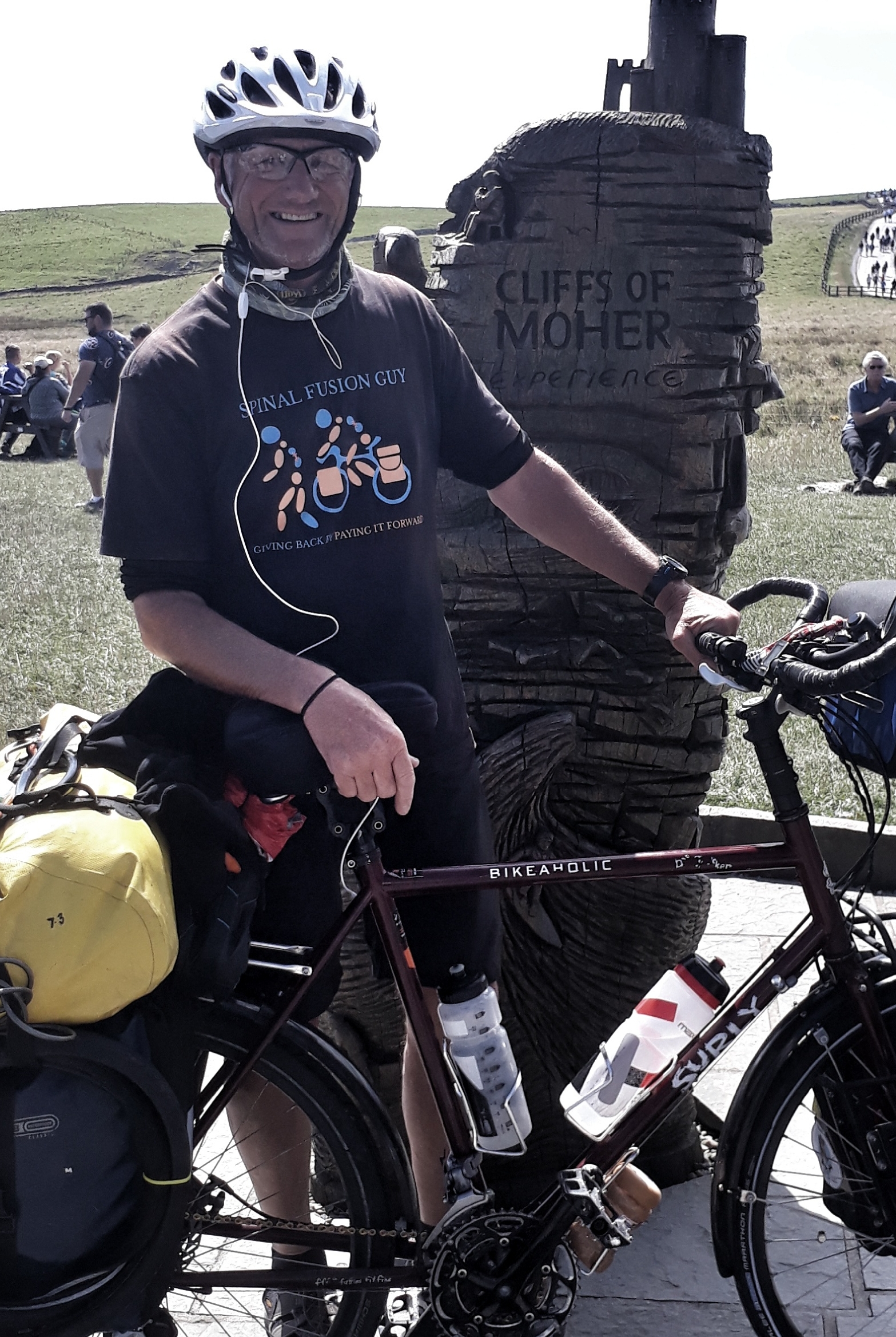 I was having severe nerve pains and there was numbness in my arms and fingers, while I was gradually loosing feeling from my waist down.

It was my neck again , things were going from bad to worse.

I had the relevant tests, MRI and X rays and it showed that I needed urgent surgery, or I would become a quadriplegic. Subsequently I had an Anterior Cervical Discectomy Fusion – an ACDF.

This a surgical operation to replace a part of a vertebra with metal screws and a titanium plate.

I also have advanced osteoarthritis…

But none of this has stopped from me cycling.

Cycling has always been a part of my life and I’d always dreamed of cycle touring. In 2012 I made this dream a reality. I cycle toured the south part of New Zealand’s South Island for two charities (Cancer Society and Cure Kids), in honour of my mother who had passed away the year before from multiple cancers.

In 2013 I got on the bike again, and this time I cycle toured the north of the South Island of New Zealand. This time though, it didn’t all go to plan. While heading along the West Coast, I began experiencing bad lower back pain, and I began to have great difficulty in even walking let alone cycling.

Unknown to me, my lower discs were bulging, and in April 2014 I again had extensive surgery. 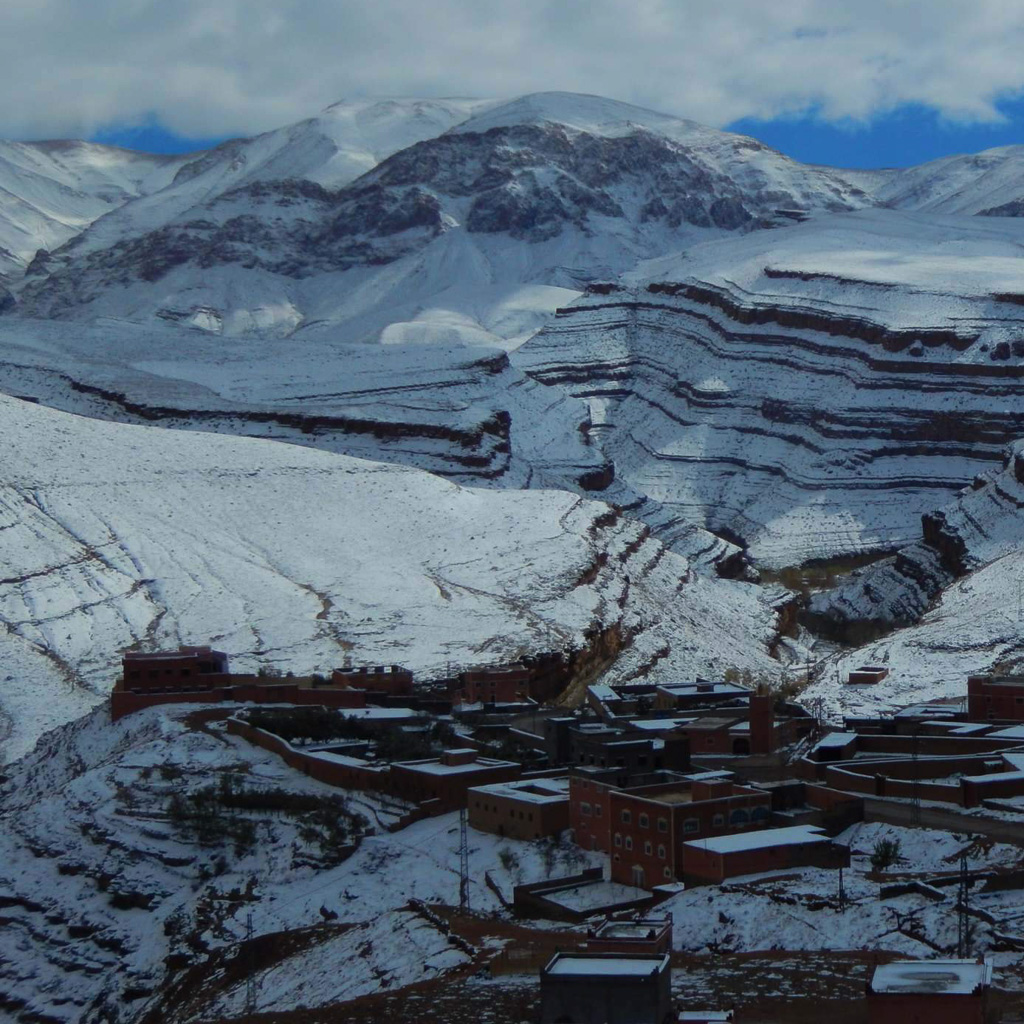 Towards the end of 2014 I found my inspiration.

I met a truly amazing cyclist, Elizabeth. She was cycling the length of New Zealand, and had already solo toured 17 countries for close to two years.

Elizabeth inspired me. And she inspired me to think bigger than I had ever before.

Just one year after my last spinal fusion operation and we were both of cycling together. First we conquered half of Japan. My back held out.

Then we flew to Istanbul and cycled across Europe. We followed the River Danube, cycled to the Netherlands and then crossed to the United Kingdom. 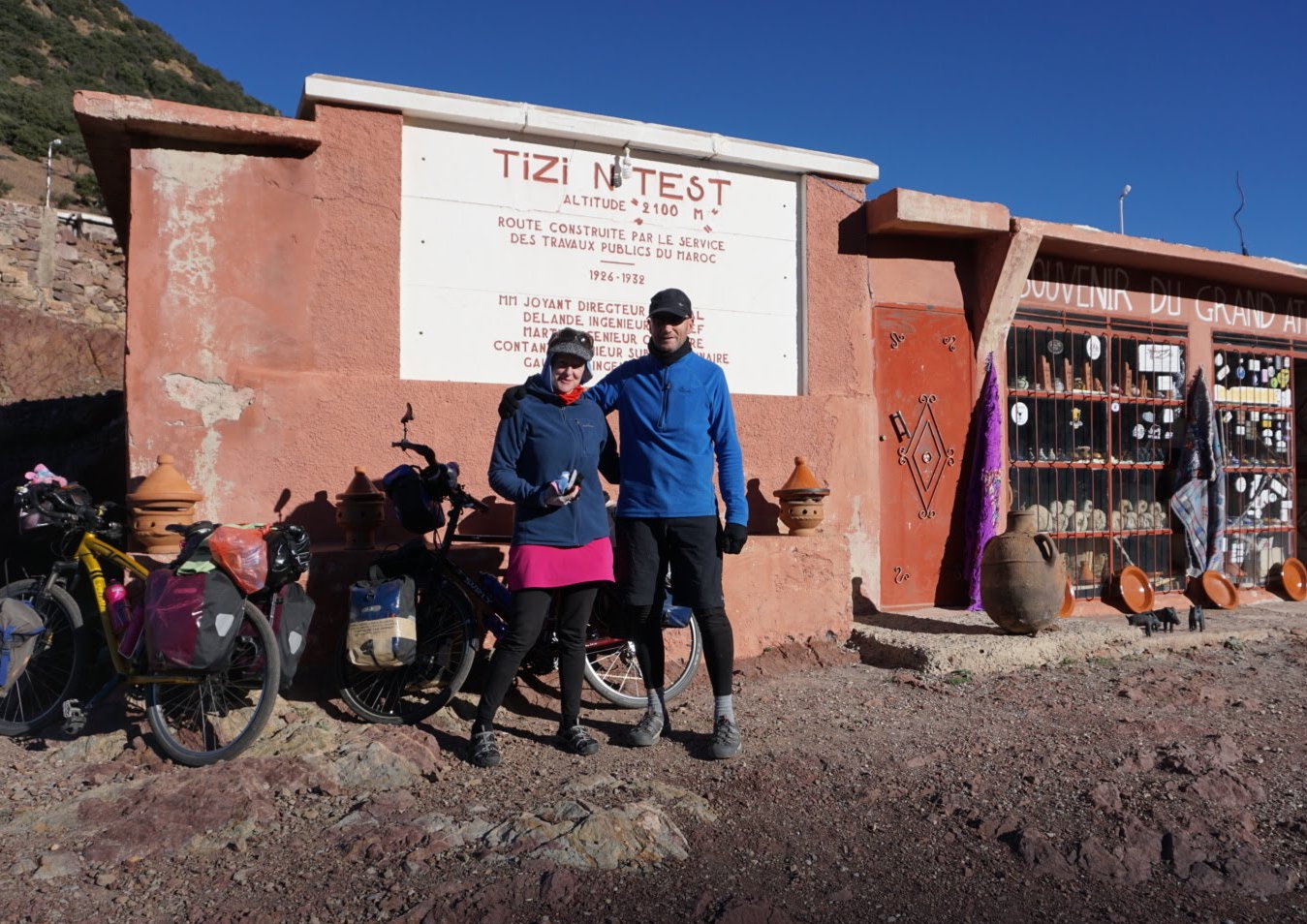 We weren’t finished yet. And my back still refused to give in.

Our next stop was Morocco. We flew into North Africa with our bikes and panniers before travelling to Spain, and then onto France, spending a further 3 months cycling.

Together we had covered close to 10,000 kilometres, I’d visited 17 countries, and completed a challenge and an adventure I’d never have thought possible when I’d had more surgery in 2014.

I returned home, but in the very first week I was longing to be back cycling in Europe again. My spinal issues seemed to be settling and becoming much better, and it was the cycle touring that had helped me.

Standing and sitting were not good for me, and it seemed that the best thing for me was to use my bike as therapy, both physically and mentally. 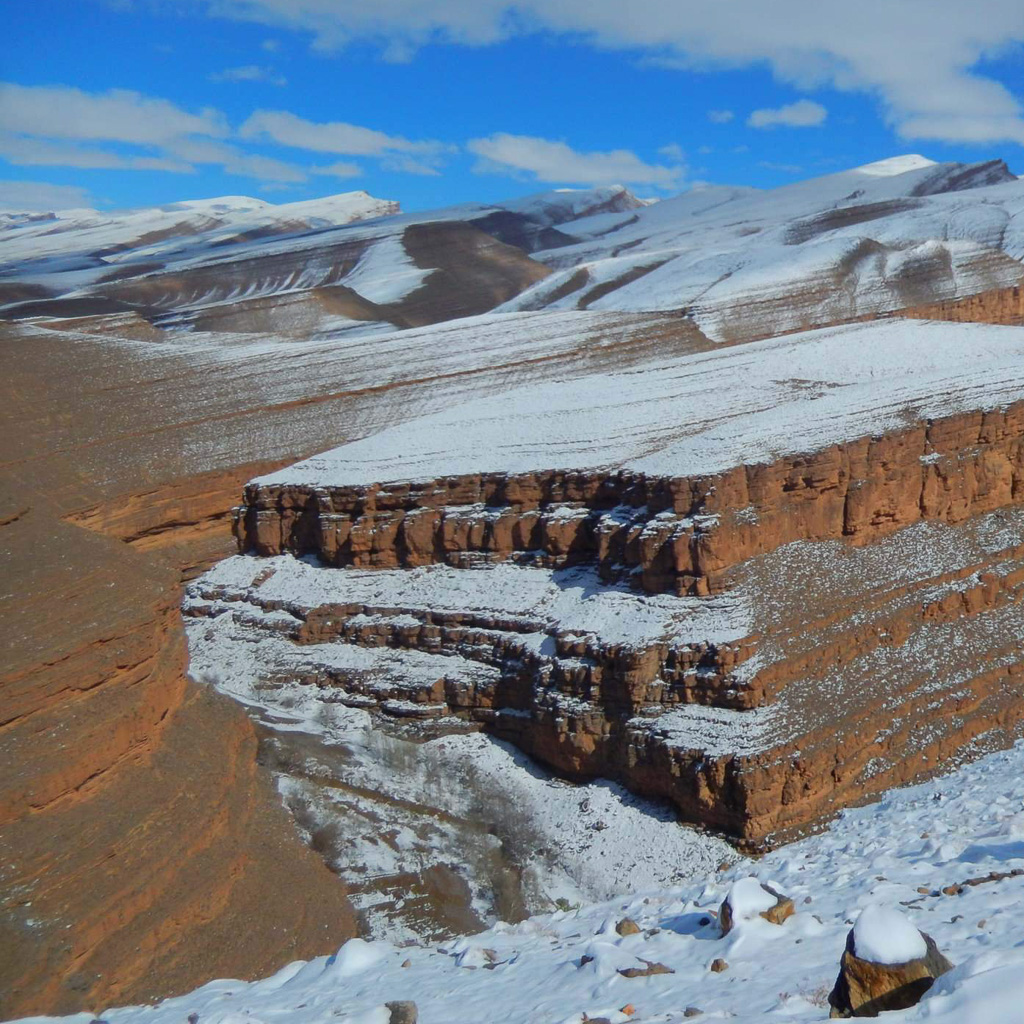 But strange as it may seem, now I wanted a greater challenge too. And this time, the bike was too easy.

I wanted to challenge myself beyond what I thought possible, and I planned to walk El Camino, the long distance hiking trail which crosses from France to the West Coast of Spain.

I would have to walk over 900 Kilometres, wearing a 10 Kilogram backpack.

I trained for 6 months straight, walking to work and back, and slowly testing and strengthening my lower back.

I was soon longing for my next cycle tour, even just a few months after walking El Camino.

This time I decided to do the Wild Atlantic Way in Ireland, a 2500 Kilometre trip, and when I finished this, I carried on, completing  a full circumnavigation of Ireland of 2738 Kilometres.

I still didn’t stop there, and have now covered over 3,000 Kilometres of road in Ireland. I have never been so encapsulated by a country. On my last day in Ireland, I simply wanted to start over again and cycle the country one more time. 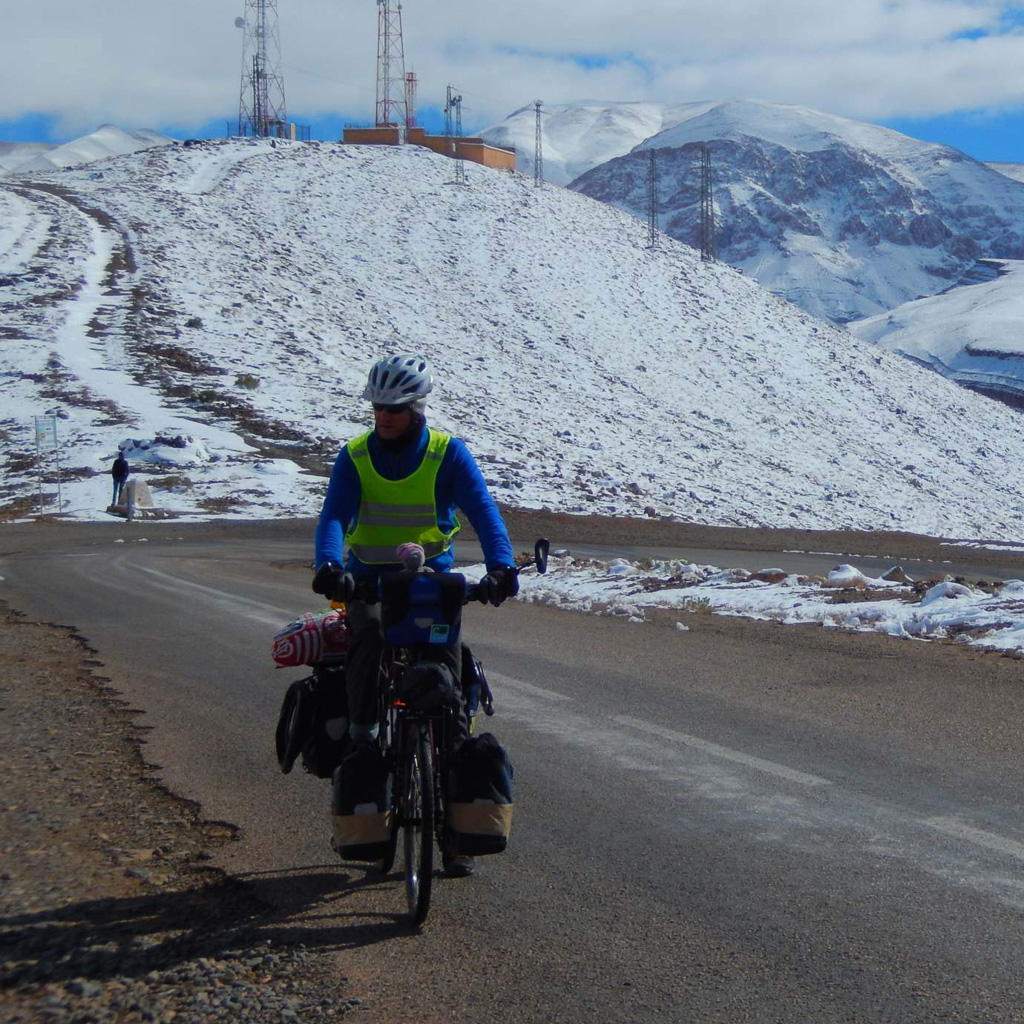 I have now had two major spinal surgeries and numerous other operations.

I am still grateful that I can even walk and cycle. I know as well, that without the walking and the cycle touring, without the challenges and the incredible and inspirational people I have met across the world, that none of this would have been possible for me, and I would never been able to do what it is I love to do.

Thanks To Paul, Spinal Fusion Fusion Guy on a Bike For His Story!