I’ve been travelling the world continuously for two years!

I’ve lived and worked all over the world in those years but the one city that held me longer than most is the relatively unknown city of Tbilisi. It’s the capital of Georgia. And it’s a city that you might never have thought would be perfect for a digital nomad!

Read on to find out why I became a digital nomad in Tbilisi and why you should too!

Tbilisi?! How do you even pronounce Tbilisi?!

Where even is this city?!

These were all thoughts that crossed my mind as I waited to board a battered old Russian minibus which would take me across the small country of Georgia and to their capital city, Tbilisi. I held onto the seat edge as the old mini bus hurtled along pot holed roads and swerved out of the way of oncoming traffic for hours as it dangerously brought me inland, from the Black Sea coast I’d been exploring, and closer to the city whose name I couldn’t yet even pronounce. 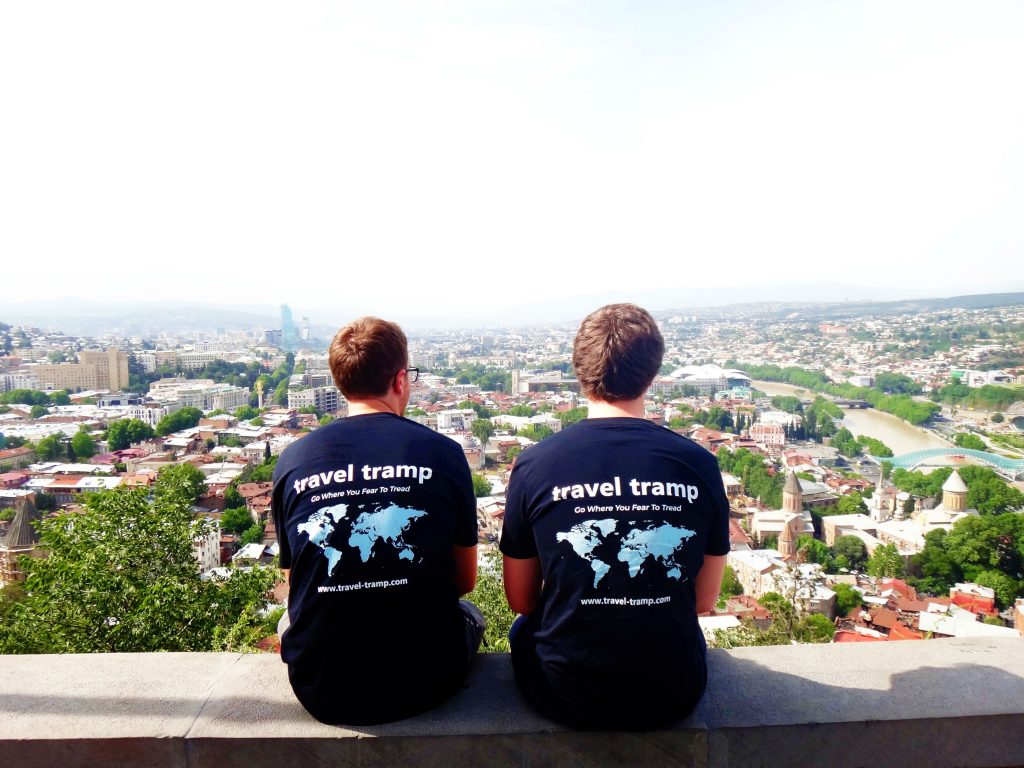 I knew that Tbilisi was the capital city of Georgia, the caucus nation I’d been exploring for a week or so since I’d crossed over from neighbouring Turkey. I knew that this capital city was inland, I couldn’t say where exactly, and aside from these very basic of facts, I knew very little about this city that was very soon, and very unexpectedly, about to become my new digital nomad home.

As I stood off the minibus, when I finally arrived in Tbilisi, I posed to myself that most important of questions for a digital nomad, ‘What’s the internet like?’

I didn’t even know that much yet.

I had a lot more to learn about Tbilisi

I’d been travelling across Georgia before I first set foot in the city, visiting the high mountains of Svaneti, exploring the beaches of Batumi and the nightlife on the Black Sea.

I already loved Georgia for its spectacular scenery, incredible food and overly hospitable people, but I hadn’t yet stayed for more than one week in any one place, I’d been moving around, working sporadically here and there, exploring a few days, then blogging a few days in random Georgian locations- wherever I found good internet- before hitting the road again.

I’ll be honest, I didn’t have high hopes for Tbilisi as a Digital Nomad location

I thought that Tbilisi would be the same, I would explore, blog a bit, and then move on- Georgia is a small country, but I still had a lot left to see, and I didn’t know anything at all really about the capital- and I planned on spending just a week here, no longer.

But all that would soon change.

The great delight in being a Digital Nomad is the flexibility it gives you.

When I stood off that minibus and asked myself if there was even internet in Tbilisi, I hadn’t for one second expected the city to enthral me as it did.

I expected a post-Soviet capital, which, with its abundance of old, socialist style apartment blocks and greying statues it was, but I wasn’t expecting the quaint, old, colourful streets of the Old Town, the thriving Georgian cultural revival after years of communist oppression, and the wine cellars stocked to the rafters with cheap yet delicious wines from the wineries that surround the city.

Perhaps it was the wine

It was the start of summer when I first arrived in Tbilisi, the restaurants and bars poured onto the streets and wine was drunk into the early hours of the mornings, in the Old Town, along the river banks and across the city. I could sweat out the hangover in the steam baths and saunas that I soon found filled the city centre. I’d had no clue that the city is built on natural hot springs, and those hot springs have led to an enduring bath culture.

Perhaps it was the wine but it was really nothing like I had expected it to be, and with the final- perhaps decisive- realisation that Tbilisi had GOOD internet connections, and not just good, but fast, as good as anywhere else in Europe, then my planned week long exploration was due for an extension.

Before I knew it I was renting an old, but refurbished and decidedly modern Stalin era apartment in the city, with super fast Wi-Fi, and a strange coin operated elevator that threatened to break down every time it was in use.

The apartment in a ‘trendy’ area of Tbilisi, near to parks, lakes and restaurants cost me just $250 a month, inclusive of bills. And that was for a short term rental agreement.

I didn’t have to worry about a visa, as Georgia is wildly generous in offering visitors from the European Union a stay of up to a year in the country, visa free. After this, if I was still hanging around, then I could simply pop across the border to neighbouring Armenia, or perhaps Turkey, pop back across the same day, and stay for another year if I so wished.

I could sit out in the cafes and bars, order coffees, beers and plates of Georgian cuisine while barely denting the bank, all the time blogging, helping locals practice their English and learning more and more about a city which a few weeks before I could barely label on a map- I still can’t pronounce Tbilisi though, I don’t know if anyone can…

Blogging about Georgia meant that soon I was picked up by the English language newspaper too, and asked to write articles for them. I took weekends off to explore the spectacular national parks, the nearby towns and to enjoy the city itself, all the time wondering just how long Tbilisi would hold me for.

The joy of being a Digital Nomad is embracing the unexpected, and having the time and the freedom to do that.

I hadn’t planned on spending more than a week in Georgia’s capital, I knew little of the place before I arrived, and expected very little from it. Luckily, I realised before I left that there was much, much more to this city that I had to learn, and much that I will never know.

Tbilisi has become one of the few cities in Europe that has really held me, and it held me there for months.

What’s the most unexpected destination you’ve found yourself living in? What is it that you love most about being a Digital Nomad? Let us know in the comments below!

Remember to check out my website, www.travel-tramp.com for awesome off the beaten track destinations and adventures from the road!